One beauty product that I don’t talk all that much about is mascara mainly because I never stick to the same mascara, once i’ve used one up i’ll just move onto another and usually one i’ve not tried out before as mascara is one of those products that works whichever one it is. Having said that I recently had a good clear out and it really brought to light which mascaras I do go back to as they definitely perform and I thought i’d share my favourite mascaras with you. 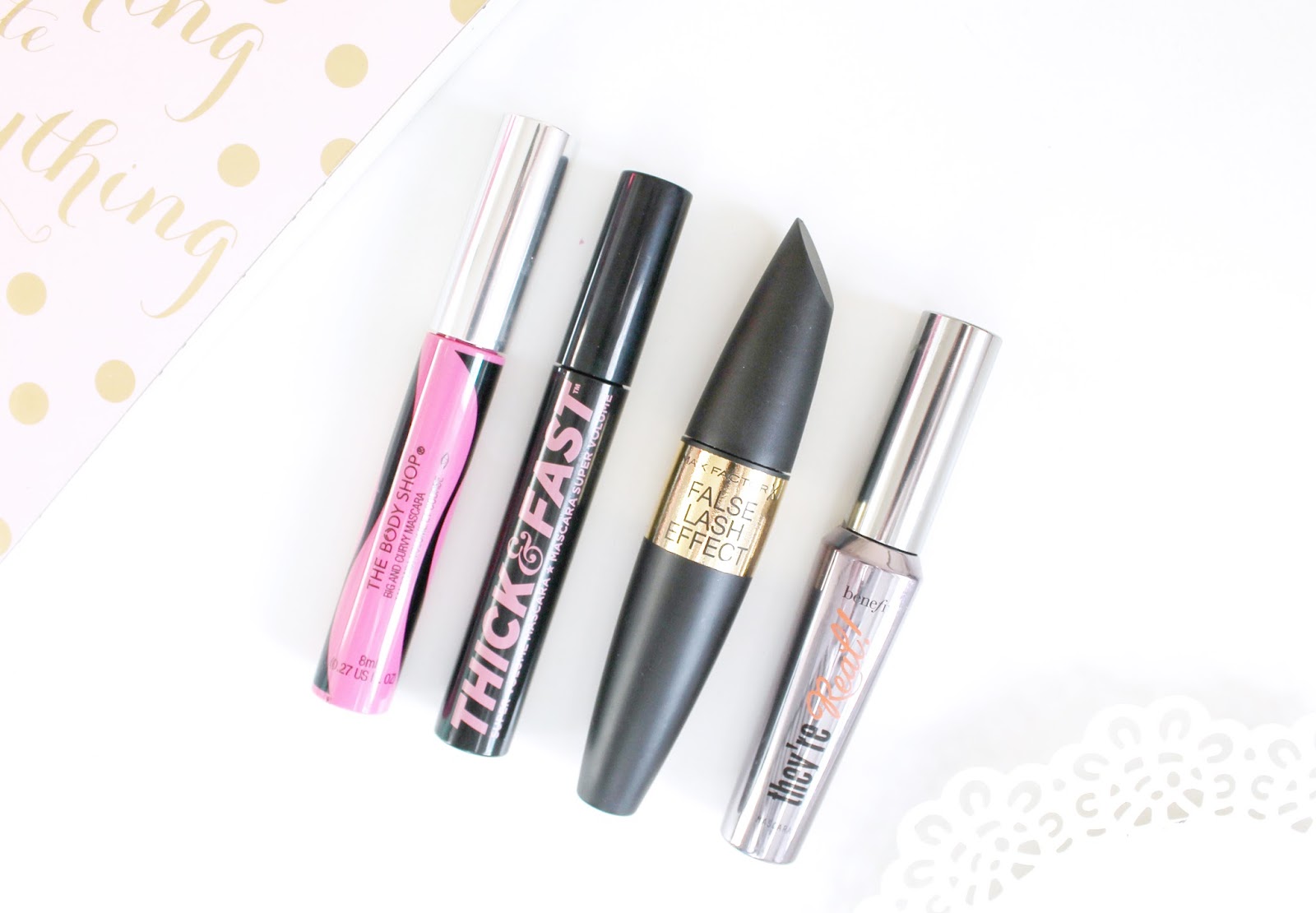 Mascara is definitely that one beauty product that i’d take to a desert island if I could only choose one, and although most mascaras do the exact same thing there are definitely a few out there that just do it for me. I usually look for a mascara that gives my eyelashes a good coverage (as I have natural blonde eyelashes), a nice amount of volume and also a good amount of length of which most mascaras do, but it’s hard to find ones that actually last throughout the day.

Firstly  is a mascara that I feel gets overlooked and not really spoken about within the blogging community is The Body Shop Big & Curvy Mascara (£10) and although i’ve only tried a handful of The Body Shop’s makeup line this is one that has always impressed me. The wand is tapered in the shape of a usual wand but it quite thin compared to other mascaras and is made of proper bristles rather than a plastic wand, which I always find gives a lot more length naturally but this wand also coats the lashes like no other mascara i’ve ever owned. I usually use this mascara when i’m really vamping up my eye look with a smokey eye as it makes my lashes look so much full and longer.

Another bristle mascara that I’m a big fan of is the Soap & Glory Thick & Fast Mascara (£8.50), which is another that I don’t hear an awful lot about but it does exactly as the name would suggest! This mascara has a very thick and large wand, which can be quite daunting when you first use it but once you get past that, this mascara gives you amazing thick lashes that look lifted and voluminous.

Moving onto the plastic wand mascaras, which I use a lot more of on a day to day basis for some reason. A recent addition into my mascara collection is the Max Factor False Lash Effect Mascara (£10.99) of which I’ve spoken about previously in my January Favourites, and although i’ve previously owned the waterproof version of this mascara, I much prefer the non waterproof version. Again this mascara has quite a large wand but I find it really grips and gets into the lashes to give them a really good coating that is super black and also super lifting. As I don’t tend to wear false lashes all that much anymore, I always turn to this one if i’m wanting my lashes to look as if I am wearing false lashes as it gives such a great curl that lasts so well throughout the day.

My last favourite mascara is of course Benefit They’re Real Mascara (£19.50), which is one that I didn’t try for such a long time until I received a mini sample in a goodie bag because I didn’t want to spend nearly £20 on a mascara to find that I didn’t like it. Luckily though, it turned out that I did in fact love this mascara as it does incredible things to your lashes. The wand of this mascara, as you probably know is a very strange shape and I find that I never really use the ball on the end but the wand just grips and coats your lashes like no other! If you haven’t yet given into the hype of this mascara, then I urge to give it a try as you will not be disappointed.

What are your favourite mascaras?