Last week I posted all about Battling The January Blues and I mentioned how i’ve found taking some down time for myself has been so beneficial and i’ve noticed a massive change in my mood and productivity levels. I wanted to discuss a little more on this topic, as i’m sure i’m not the only person taking more self care steps in 2018, and I thought it may be useful to share some words of wisdom. 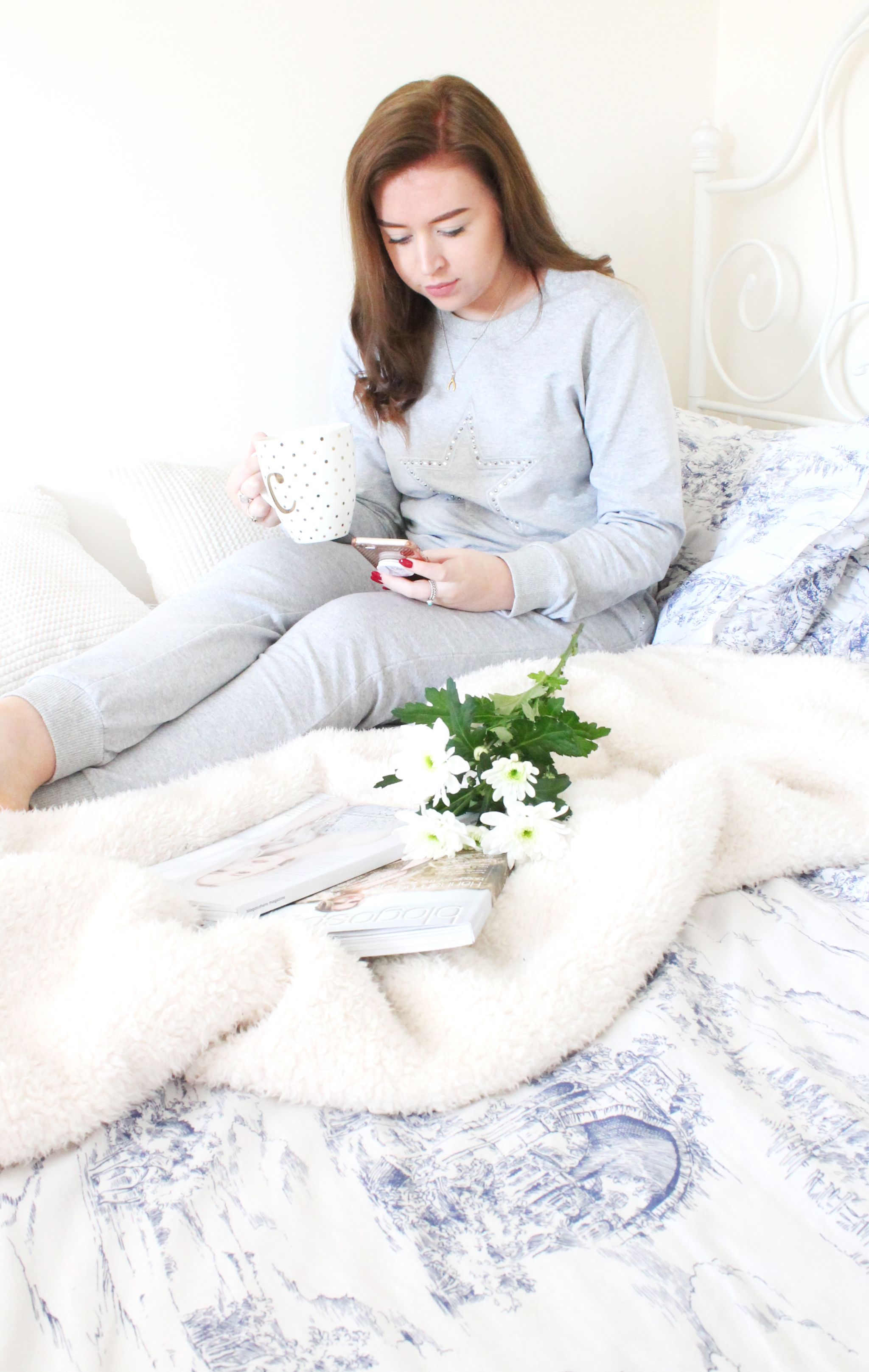 I’ve learnt over the past few months that self care is something i’ve needed for a long while, as I constantly feel like i’m always on the go and the only bit of down time I get is when i’m asleep, which I know is probably the same for many of us gals and guys out there. To be frank being in a full time career is hard word, and I say career here because for me my career is what I want to do in life, it’s not just a job that brings in the money to pay the bills that I have no interest in, it’s more than that, it’s a massive part of my life that i’ve chosen to dedicate myself and quite often my spare time to because I love it! With that also comes juggling relationships, friendships, a social life, hobbies and everything else, which just writing is giving me a bit of anxiety because it’s hard to put time into all of those things, let alone taking some time for yourself.

As i’ve gotten older i’ve really come to realise that having less friends and sticking with the ones that really care is better than having a massive circle of friends, and I’ve also learnt that putting myself first is my first priority in life and will be going forward from the beginning of this year for pretty much the rest of my life (sorry to get deep), and i’ve really been taking the steps to do so recently, without feeling one ounce of guilt.

Our bodies and our minds are the most important things, I mean they keep us going and it’s okay to take time to care for them, in fact i’d highly recommend it because I have become a much happier person, both in terms of mind but also my body feels happier too. I’ve noticed my body almost thanking me for little things such as, not eating until I literally can’t eat anymore, as I used to suffer with the worst stomach pains for days, and since switching to meal prepping and eating less carbs (I say less, I still eat rice and pasta but cutting things like garlic breads with dinners out, or having one wrap instead of two at lunch) you wouldn’t believe the difference in how much better I feel. It’s about what works for you, and you won’t notice certain things until you try for yourself. 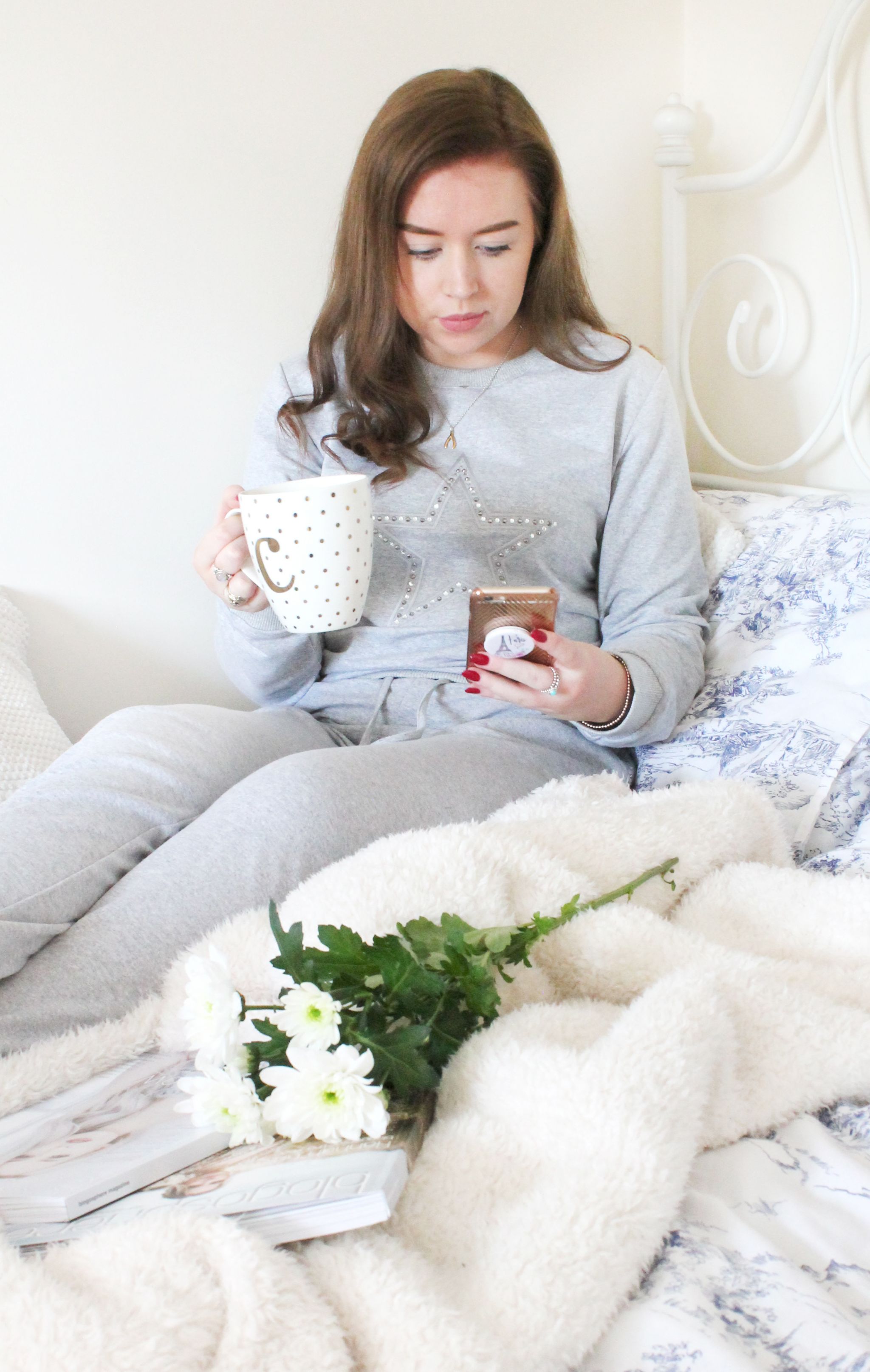 I’ve also been taking more down time in the evenings especially once i’m home from the gym, which by the way is a great way to just release any stress that has built from a day at work and as i’ve mentioned, fitness has become a massive part of my life and I really find my mind and my body thanking me for getting back into it (but i’ll be sharing more on that soon). Any who, down time in the evenings has been something I now look forward to, i’ll either have a hot shower or a quick dip in the bath with one or two bath bombs, whack on some loungewear that i’ve no doubt popped on the radiator to warm through and just chill.

Some loungewear pieces that i’ve been loving recently are from Cari’s Closet, of who are an Irish boutique that stock some lovely pieces of clothing, but i’ve been living in their Jaden Star Loungewear Set* (£34.80) of an evening. The quality of the fabric is so nice and feels so soft on the skin that I often find myself so comfy that I don’t want to change into my PJ’s when I do finally go to bed. I also love the star heat seal detail to the top as it adds a lovely touch, and the bottoms also have a little touch of heat seal studding around the pockets. If you’re on the look out for some new loungewear, i’d definitely recommend checking them out.

Most evenings I will still do my usual scrolling through social media, or catching up on Youtube as I do like to still be in the loop, but I have found that completely switching off and just getting an early night to be so good, as it means I get a good nights sleep and my mind also gets a good rest also. I’ve also been less active on social media throughout the day and i’ve not been posting as much on Instagram, which used to be a massive stress of mine, whereas now I couldn’t care less. It’s such a hard platform to grow and i’ve learnt that I need to have fun with what i’m doing rather than putting extra pressure on myself.

I think i’ve probably rambled on enough here, but I wanted to share more on the topic of self care and how i’m feeling so much better for taking the steps to look after myself, of which i’d highly recommend doing a couple of times a week.

What do you do in terms of self care and down time?